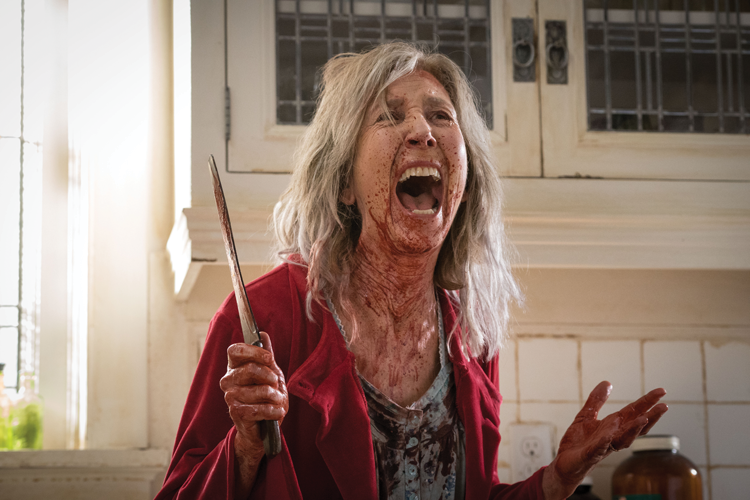 
Centring on the idea that if someone is killed in a fit of a rage, the act curses the house it takes place in and leaves anyone who enters it mad, murderous and suicidal (in turn, making their own home a new site of infectious evil), Nicolas Pesce’s The Grudge bends Takashi Shimizu’s mythology to create a more grounded and grisly instalment in the supernatural franchise.

Like its predecessors, it follows several ill-fated families. In 2004, spooked Tokyo-based case worker Fiona Landers returns to her family in Pennsylvania, bringing back more than just her suitcase, while her estate agent Peter (Cho, underused) and his wife (Gilpin) face the heartbreaking decision over whether to move forward with a pregnancy.

A year later, the Landers’ old house is occupied by William (Faison) and his wife Faith (Shaye), whose worsening dementia makes her more susceptible to seeing the spirits lurking about the property.

And in 2006, recently widowed mother Detective Muldoon (Riseborough) arrives in town to investigate a couple of recent – and of course, related – deaths, much to the dismay of her new partner (Bichir).

Cinematographer Zachary Galler’s moody shots and Riseborough’s performance (which feels almost Fincher-esque in its gloom as she descends into case-related obsession) are high points. But much of The Grudge’s iconography – a dark-haired spectre peeking out from murky water, burning buildings and grubby fingers emerging from shampooed heads – is lifted straight from earlier versions, dulling the tension. Effective moments that hint at themes of abuse or mental illness are often undercut by silly jump scares, abandoned plot points and even the occasional laugh, too.

While it does manage to differentiate from other Grudge outings a little, it nevertheless renders itself a generic haunted house movie where conclusions are predictable and character development is non-existent. In its opening titles, The Grudge explains that once the titular curse has taken hold of someone, it “never lets them go”. Now that it can location-hop, and sequels are justifiable, horror lovers might wind up being its real victims.

The Grudge is available now on DVD and Blu-ray from Sony Pictures Home Entertainment.