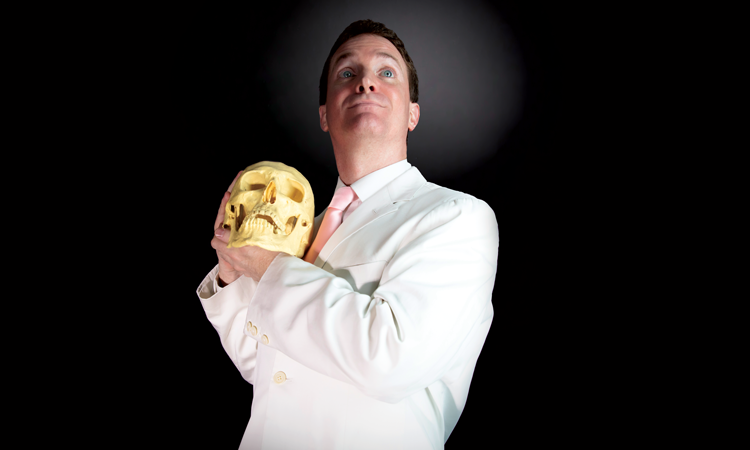 
Can you tell us a bit about your upcoming book, The Southern Book Club’s Guide To Slaying Vampires?

Growing up, I hated my mum’s book club; I thought they were just a bunch of silly housewives, but when I got to know them as adults I realised I was the idiot. These women had dealt with things I could barely even dream of handling and they’d done it while keeping their kids in the dark about the difficulties they’d faced. For years, I wanted to write a book that reproduced my experience, going from dismissing them to being impressed by them, and finally all the pieces came together with Southern Book Club. It’s about a book club that becomes convinced their new neighbour is a vampire and must be destroyed. Which turns out to be a terrible idea.

Why did you decide to go down the ‘housewife’ route for the protagonists?

It’s set in the early Nineties, in suburban South Carolina, and that’s what a lot of the women I knew back then were – homemakers and housewives. They notice everything and make it a priority to understand how human beings work. There are also a lot of books about housewives that are pretty snotty and patronising, so it was fun to take the piss out of them by undermining their conventions and jumping up and down on their cliches.

Why did you decide to set the book in the Nineties?

I needed to write about a time I understood, and I’ve got first-hand experience with the Nineties. A lot of people call it ‘the decade when nothing happened’ but everything happening today is rooted in the Nineties. It was the last time we impeached a president, we deregulated the banks, reality culture began to blossom, the news cycle went 24-hours, and calls for diversity and representation got too loud to ignore.

What made you decide to set the book in southern America?

They say ‘write what you know’ and my book is set in the Old Village of Mt. Pleasant, which is where I grew up. I know how it works, I know what winning the Alhambra Pride award for your front yard means, I know what flavours of ice cream the soda fountain at the Pitt Street Pharmacy serves, and that on Halloween every house keeps a bottle of something behind the front door for dads taking their kids trick or treating.

You’ve created your own vampire lore in the novel, how did you decide on your ‘vampire rules’?

With vampires there’s a single big choice: supernatural or not? I chose ‘not’ and everything else fell pretty much into place. If a vampire isn’t supernatural it can’t shed mass and turn into a bat, it’s not scared of crosses, and it has a reflection. But human blood doesn’t really have enough calories or nutrients to keep a living creature alive, so it doesn’t need to eat, and its internal organs don’t function since it’s ‘dead’, but it needs blood for something, right? So I just followed the chain of logic that presents itself from the question of how does this creature work if it’s not supernatural. And what I wound up with is disgusting, so I apologise in advance.

Why did you decide to focus the central friendship group on a book club?

Southern Book Club is a spiritual sequel to My Best Friend’s Exorcism in the sense that both books take place in the same neighbourhood, around the same time, and they both focus on friendship. But in My Best Friend’s Exorcism the focus is on teenaged friendship which is passionate, dramatic and all-consuming. Southern Book Club focuses on adult friendship which is quieter, but stronger, and while it doesn’t run as hot, it runs much more true, and lasts much longer.

How did you decide on the novels that indicate each stage of the book?

It’s about a book club, so it makes sense that the book would be structured around what they’re reading. Originally their book selections didn’t follow any theme, and I wrote two drafts where the books they read reflected the events of the plot like Madame Bovary, Dracula, and so on. Then I realised it would be a lot more fun if they were a true crime book club. Doing the research for that was a blast. The books I picked were the ones I liked, that I felt reflected something of what was going on in that part of the story, and that smelled the most of the Nineties.

If you were part of a book club, what book would you choose to host?

Recently it came to my attention that some people have made it to adulthood without ever having read Shirley Jackson. She’s one of the most important writers of the 20th century. So I’ve made it my goal to ensure that everyone I know has We Have Always Lived In The Castle inflicted upon them.

There’s a focus on the Ted Bundy case and in particular, Ann Rule, in the novel, what made you focus on that?

Ann Rule’s book about the Bundy case, The Stranger Beside Me, is a modern day classic, the book that kicked off the true crime genre as we know it. On top of that, the Ted Bundy crimes are the modern day Dracula story: a charming man lives a double life, existing as a yuppie by day, and by night he sneaks into women’s bedrooms to wallow in their blood.

What other authors/novels are you reading right now?

Right now, I’m putting together a ton of vampire material to do some live shows, which means all I read are vampire books. If you’ve got a thing for 19th Century novels, Florence Marryat’s Blood Of The Vampire is an eye-opener. Written before Bram Stoker’s Dracula it’s about a psychic vampire who’s a sort of manic pixie dream girl who sucks people’s life out of them and leaves them desiccated husks.

If you want to try something more contemporary, before he decided he’d been abducted by a UFO, author Whitley Strieber wrote The Hunger which may be one of the best vampire books of the Eighties.

I’ve got a book coming out in 2021 and 2022, and a non-fiction book about kung fu movies arriving in America before that, so I’ve chained myself to my desk every day to get all those done.